let me start off by saying: I LOVE THE DODGERS. i am true blue through and through. (that was a little much, but you know what i mean) i grew up going to dodger games at chavez ravine with my dad. always getting a all-beef dodger dog and a chipwich (which if you don’t know what that is, you are missing out, yum) and sometimes if my dad was feeling generous, a foam finger. when i went to summer camp, we trouped all the way to LA to go to at least 2 games a summer and it was usually my favorite day. once, for girl scout day (yes, i have my gold award and i’m a lifetime member… nerd alert) we got to go on the field. the last few years, i’ve been blessed to have two hookups for tickets to games: my wonderful ex-roommate hilary and my dear old friend ben. those days are waning though because ben quit his job with the dodgers and moved to africa for 9 months and hilary just got accepted into teach for america and will thus be moving across the country to washington dc where she will no longer have access to fox sports west dodger tickets. soon, when i go to LA i will have to pay for tickets to see the boys in blue. this makes me sad.

getting on to the point of this post…i decided to do something about my sorrows and go to petco park in downtown san diego so watch the dodgers play the padres. here is how petco park is different from dodger stadium:location – petco park is located in the cool hip part of town where the people who live in the fancy high rises can watch from their rooftop garden. yes, i’m serious. see here.

fans – the pride of LA is sitting in the outfield and watching as giants and dodgers fans alike get tossed out for unruliness. that is why they no longer sell alcohol in the outfield seats. padres fans where very polite, even shaking our hands at the end of the game.cleanliness – the park is new, so it’s like we’re on wisteria lane. no trash, no old signs, no stains.history – dodger stadium has a lot of history to it. it’s great and awesome and has been there since 1962. we’ve won 4 world championships since then. petco park has a cool old building in it made from brick so it kinda feels like you’re on the east coast, but other than that, it’s new new new. (see the left side of the photo for part of the brick building)5 for $5 – hot dog, popcorn, cookie, peanuts, soda for $5. upgrade to a beer for $5 more. so good and so worth it even though it’s a smaller portion. i think i handed over my paycheck when i got a dodger dog, beer and chipwich last fall.park in the park – what i think is the coolest thing about petco park is that they literally have a park in the outfield where kids can play ball and you can sit on the lawn and watch the game. great for families or people who are too cheap to buy real seats. they have a huge tv playing the game on the back of that black building in the middle of the photo. 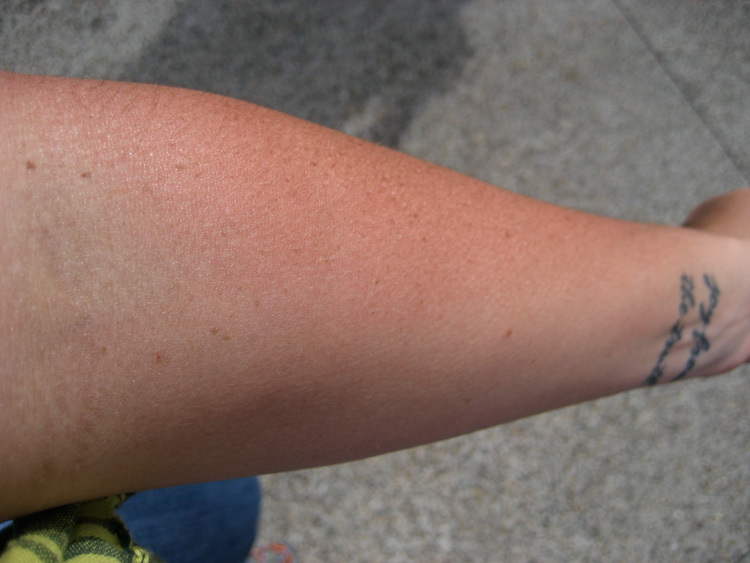 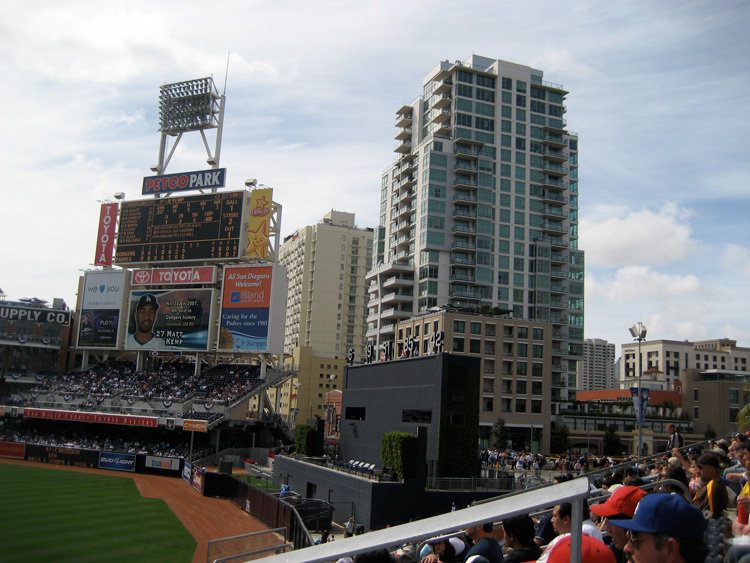 overall i was really impressed by petco park. it was a fun game, even though my dodgers lost (and i thought the padres were supposed to be terrible this year!). there is even a door in the club store where you can walk out and go out in left field, but it is closed only when they are playing the dodgers. i think they just don’t want people harassing manny. we will probably be going back to see another game, maybe sit in the park and have a hot dog topped by onions and ketchup. but i will definitely be wearing sunscreen the next time.